Since the launch on the market of our brand over 10 years ago, as Climbing Technology we’ve always supported and cooperated with men and women who have tracked their own path in climbing and mountaineering. Numbers themselves had never said much to us, or at least not everything, about the true relevance of an ascent: what actually fascinate and truly attract us are the stories of people and athletes who swim against the tide, who are brave enough to make personal choices, arose from their own passion and willing to fulfill their dreams, instead of seeking for public approval or following the mainstream mountaineering trends.

According to this vision, this year we chose to sponsor Zdeněk Hák, also known as “Hacek”, a forty-year-old alpinist already member of our Czech team. Alpine guide since 2010, Zdeněk carved out himself a reputation among mountaineering chronicles by opening in 2017 a new line, “Statisfation”, on Gasherbrum I (8.068 m a.s.l.) – Pakistan – with his mate, Marek Holeček. This feat led them to be awarded in 2018 with the Piolet d’Or, the highest recognition of alpinism worldwide. Actually, Zdeněk doesn’t set his goals just on the highest peaks of the world: as is well known, today’s highest-level mountaineering finds its fertile ground on not-so-famous peaks between 6000 and 7000 m a.s.l., where technical difficulties can be combined with altitude’s challenges. In this regard can be mentioned the ascent he realized last year, always with Marek, on the west side of Kyazo Ri (6186 m a.s.l.), Nepal, climbing in alpine style the new route “Lapse of Reason”.

And again, few days ago, he held true to this vision by reaching the summit of Chamlang (7319 m a.s.l.), Nepal, still with Marek by his side.

As stated by the few info arriving from Nepal, it seems like the guys has reached the top of this giant after opening a new vert technical line on its unclimbed north-west face. At the moment the two alpinists are already on base camp, after being without food since the last two days of the descent.

To both of them all our support and cheers for this incredible achievement, that for sure will gain a place into the hall of fame of alpine style mountaineering, and our best wishes to keep following the path that has already seen many others Czech in the past playing a leading role on the world alpinism’s stage. We just can’t wait to have a phone call and swap some talks in his company about this amazing adventure!

In an historical moment where the unsustainability of a disposable mountaineering on the most celebrate and iconic world’s peaks is there for all to see, we firmly believe these achievements show everyone that solitude and isolation are sine qua non conditions for truly experiencing alpinism, today more than ever, whether we’re talking about climbing in Himalaya or in the Alps, seeking adventure in our home mountains. 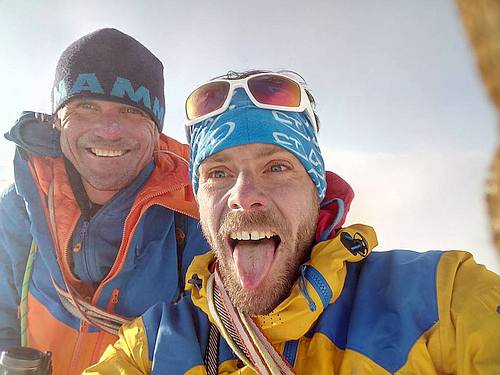