“But at that point weather turned worse if possible. A too strong wind and a continuous snowing. Time is never going on in the ledge, the shell every day must be scrub from rime to stay less wet. Also to take snow for melted it and drink is a problem and as well <<go to the toilet>>. Food was beginning to run low. Since three days we were blocked.

Some wind gusts were really scaring, and the ledge fly up and down against the wall. It’s a deafening noise. We however forgot the sound of every seracs falling down but we were worried about the few foods. Rolo said that weather wouldn’t change in the next days. It was time to decide, stay or rappel?

We’ve no more fixed ropes under our tents, we have yet someone but for sure not enough to arrive at the base. On 21th we decided to rappel in some way. We reached the cave at 6pm, with no more forces. The bad surprise: someone move the shell and It snowed inside. We’re very tired and now also angry. A 3 hours efforts to clean up inside. But the cave is very protective instead of ledge. Silence, no risk of fall and… a lot of snow to melt for drink. It seems a sort of paradise. Also in the cave our food reserves was lacking but until we stay here we don’t consume our provision on the wall.

The day after weather was horrible. Strong wind and snowing, and so the following day. Aeolus kept company to us, we felt its presence because of the snow covering the door-shell of our “casita”, we were blocked and exit only for physiological needs. Outside a hell with wind and spindrifts: in such days the world seems very terrible. But at least in the cave there’s the music of the Ale and Giorgio’s Ukulele and sing. The forecast said that on 25th November It turn good, we left, on the morning but after fifteen minutes he storm push back us. 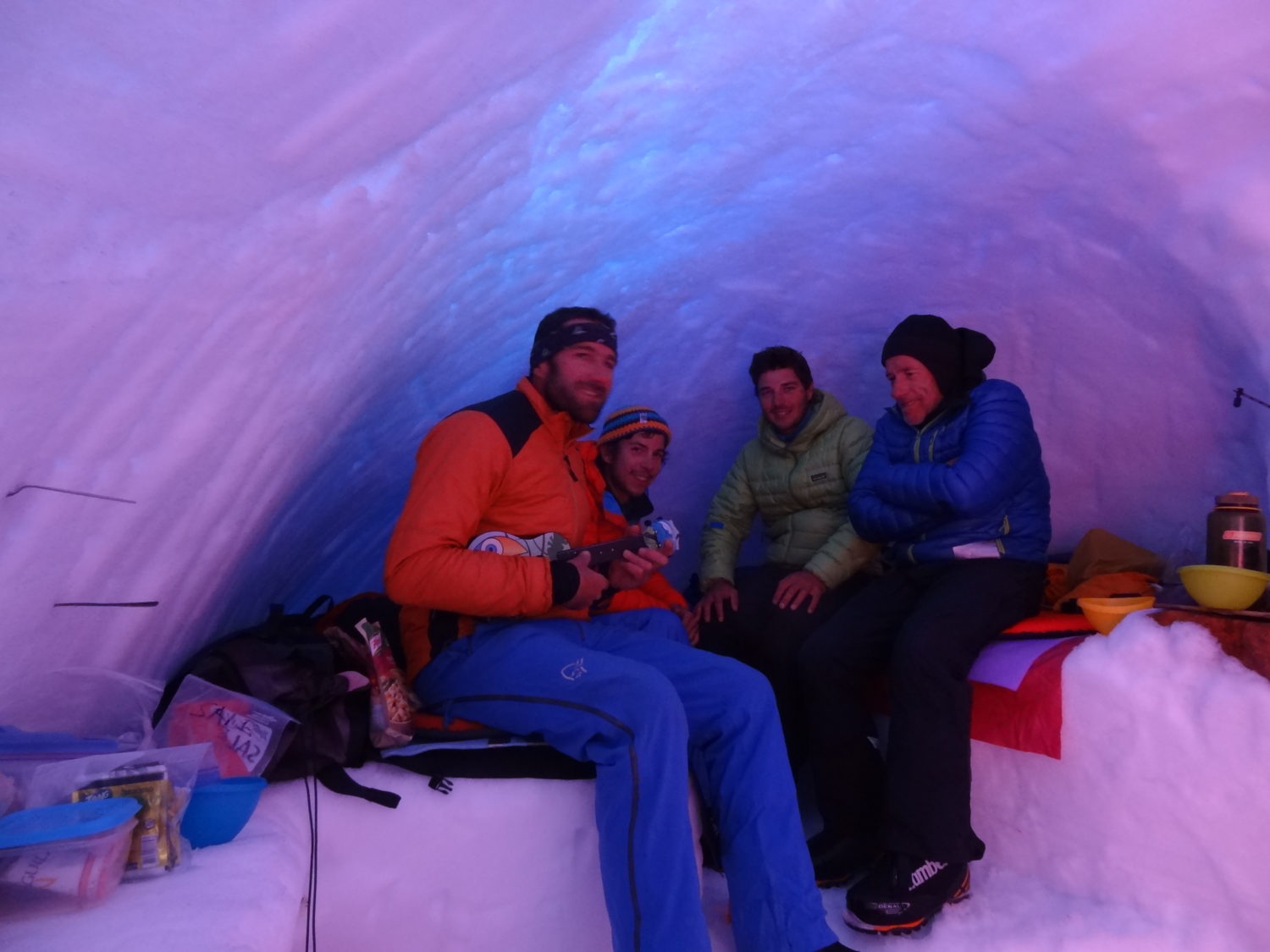 We tried again the day after, our last attempt. Weather was nice and also warm. We had to climb again the first part because we finished the fixed ropes. The hardest part. We were a little bit tired probably for the few eating. We reached the “vivac de lo Cuatros” and reassemble the ledge and melt the snow. Ale and Giorgio reached the top of the ropes and Ale solve the difficult great roof. At that point we were on the final wall. The following morning with Mirko woke up at 3:50: we boiled the water, breakfast, the gear and… go! At 7:20 we attack an hard pitch over the roof: the exposition is amazing! At 12 am Giorgio and Ale reach us and he took the lead on a series of small dihedral. Then It’s my round. On the left over the angle there would be an inviting crack, but after few meters It finish. Fatiguing I tried in an insidious dihedral for 20 meter and, after that… Nothing! I was lost in nothing, the crack ended. What could we do? After few sad words I rappel down. Hard decision but the direction could be only down. At 21:30 we reached the ledge with all the gear. 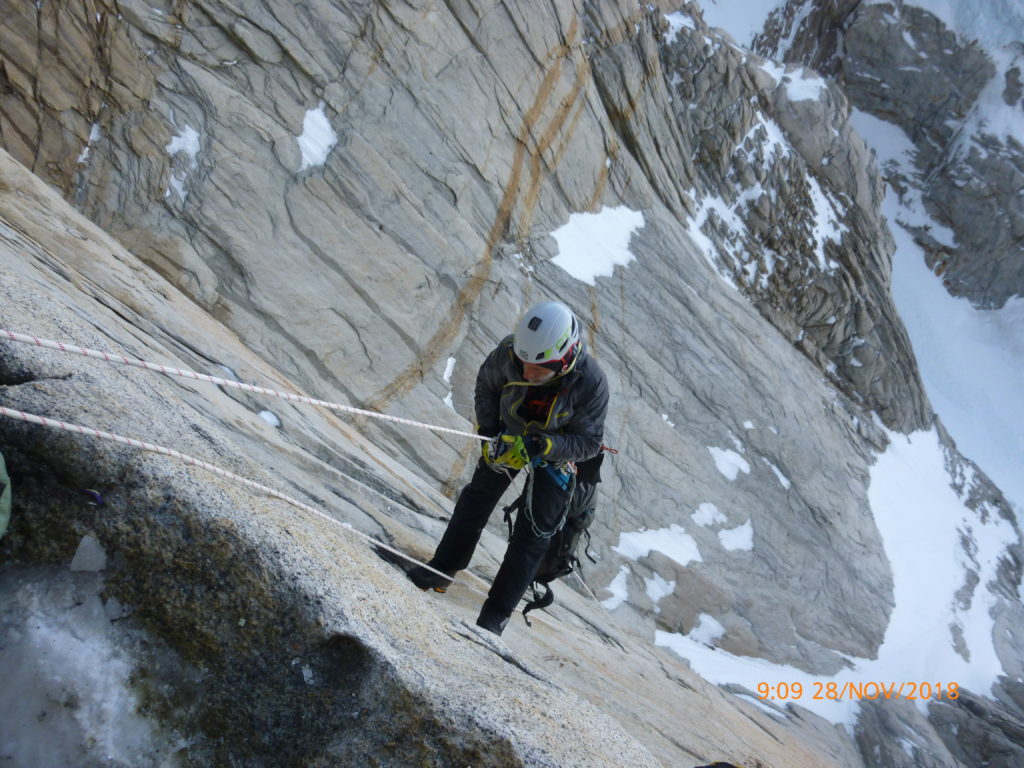 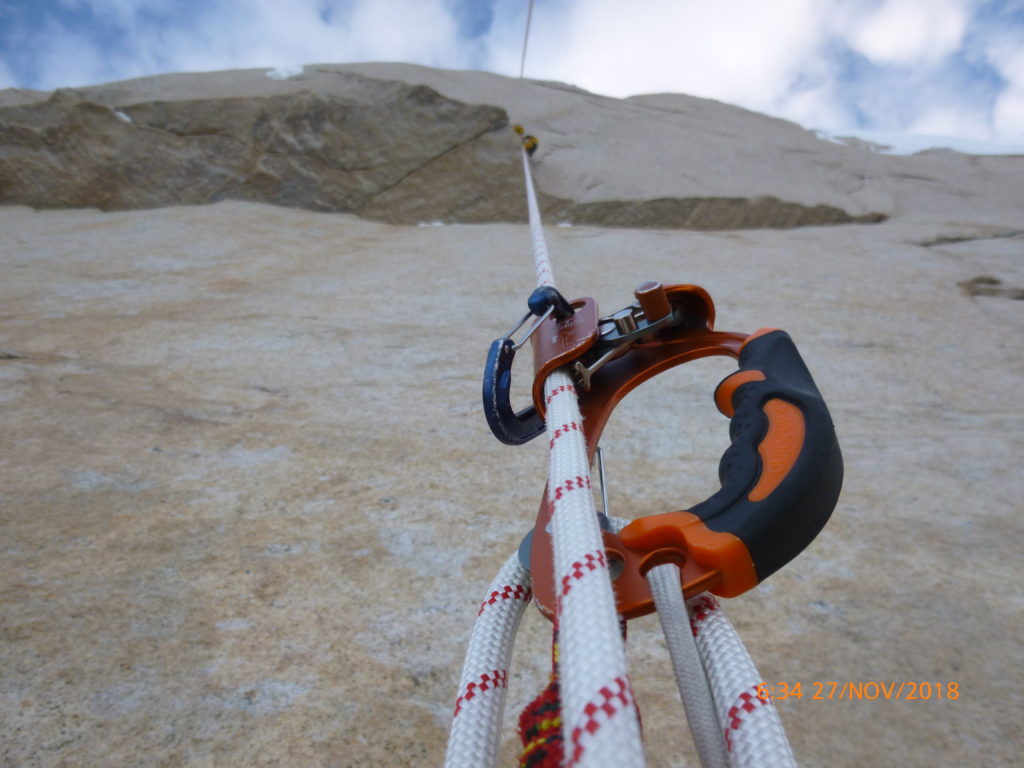 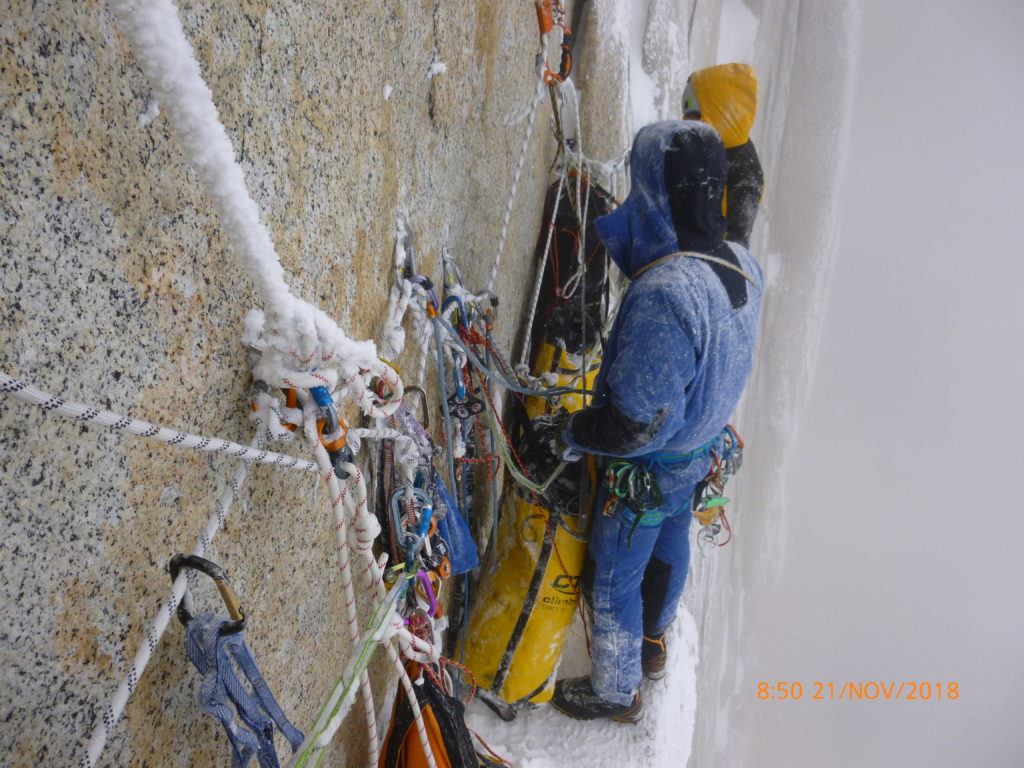 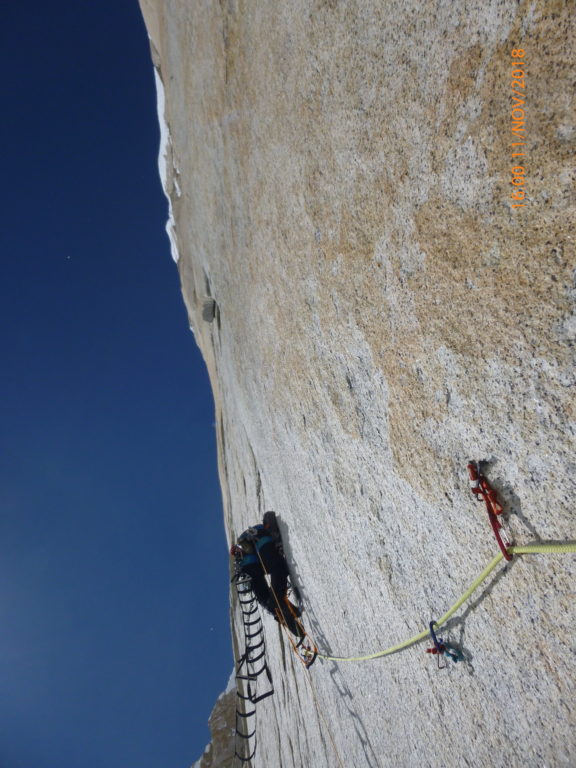 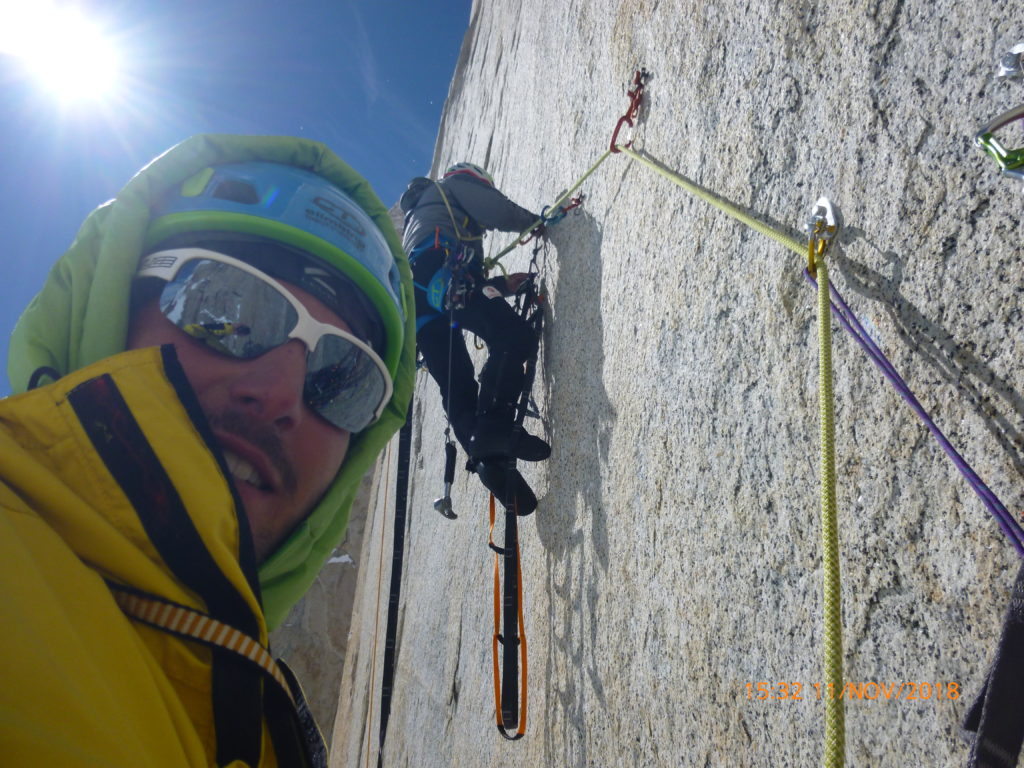 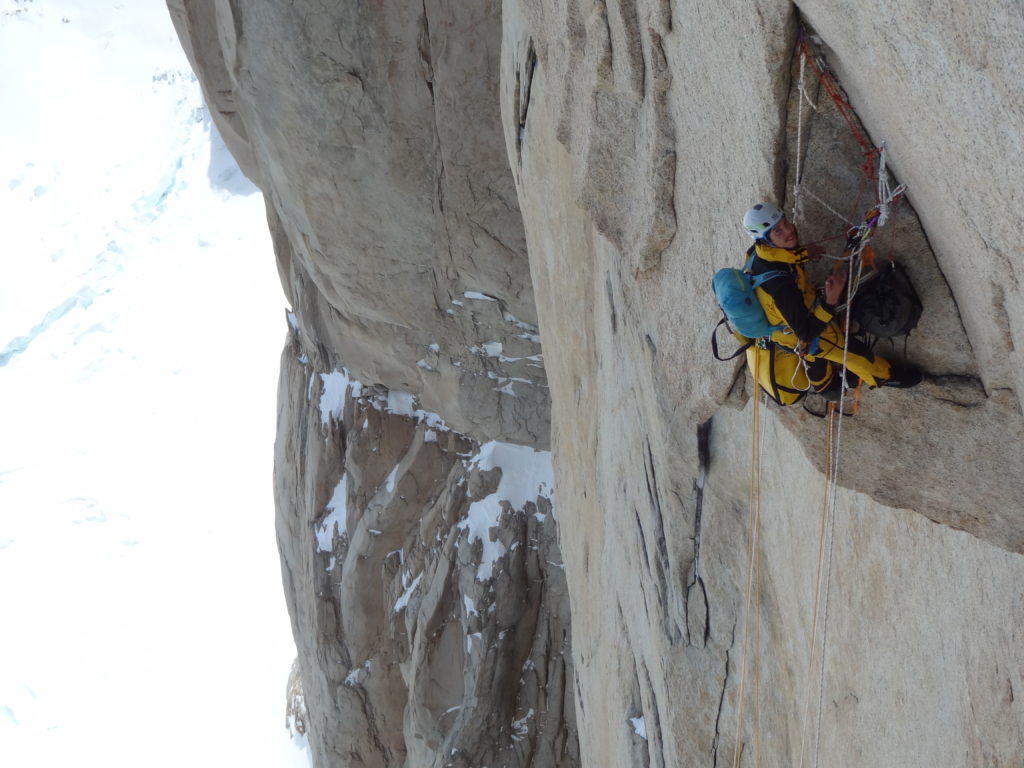