«Taghia is isolated, in amidst the Atlas Mountains of Morocco, which in Berber means “canyon”. To reach it you need to head out of this world and enter, helped by mules to carry gear, in a parallel world. Climbing in Taghia means heading into noisy and very tall canyons, to reach rock walls of red, compact limestone, sharp and abrading. A simply fantastic area, perfect for fully experiencing the pleasures of climbing! But it also means wandering along the plateaus following the hidden paths of shepherds, speaking with hand gestures to the local people who seem to come from another era, sipping tea to warm up while winter enters the houses made of stone and dirt, without heating and without a door. They have tried to build a road to bring Taghia to civilisation, but then river and mountains took over their lost space, leaving mules to get on with their essential role, of transporting and working. Taghia thus remains in its own little world, bastion of an archaic and fascinating type of nature».

The routes climbed in 9 days in Taghia:

Tell us why you chose Taghia…Was it the first time for you? How long had you been planning this trip?

With Matteo Baù we started thinking of Taghia in August, while we climbed together in the Dolomites. It was the first time in Taghia for both of us, we were curious to touch with hand the red rock we had read about in books and had heard so much about from our friends, it is famous for having one of the best limestone in the world. Then at the last minute, for only four days Andreas Renner joined us, he is an Austrian friend. He didn’t have much time, but after a quick visit with his girlfriend a few years ago, he  was fascinated by the area that he decided that it was worth while heading back even if only for a short time.

From the photos you sent us we could sense that the weather conditions weren’t exactly warm…we saw rock faces covered in snow. Was this expected since you went late on in the season or instead was it a good period for climbing and it was just bad luck?

Taghia is situated at 1800 metres of altitude, the surrounding peaks almost reach 3000 metres. However, due to its geographical latitude, the best conditions can be found during spring time and autumn. During the first few days of our trip winter made an unexpected visit, but only for a few days.

In spite of this, in 9 days you did a lot: 7 routes in 9 days among which a couple over 500 metres long…which one did you like the most and do you have any special anecdotes which you will remember about this trip?

I did not experience this binge of routes as a sterile collection. I have a special memory of each day; on the Zebda route we had to abseil down through a freezing cold blizzard, soaking wet and trembling. We then went back on the rock face from above to finish the last three pitches, in one of the active rest days we actually allowed ourselves!

Motivated to climb even the day after the snowfall, we chose a wall facing the sun. But this was nonetheless wet, we had to get rid of snow and ice from the holds and spindrift from up above. Even if it was a sports climbing route, it was for us a great mountaineering adventure! On the last day on the Baraka route, our bodies started to rebel, our feet were screaming inside our climbing shoes and our hands were so sore even just touching the rock. Once we got to the top of Oujdad the most panoramic summit which overlooks Taghia, we forgot all that suffering. Barak means “full up” in Berber, and in that moment we were really “full up” with climbing.

The best route for me however was Ace du Mal, 14 pitches along 500 metres mainly of 7a obligatory but never dangerous. Amazing rock, homogenous difficulties, surely one of the best routes I have ever climbed.

What Climbing Technology products did you choose to bring with you?

As well as all of my personal gear, with me I had the fly-weight evo quick-draws, very light which took up the space of only two chalk bags. I then had the Azimut back pack with me, a perfect haul bag for a quick roped party of two. When Andreas was climbing with us, I used the Craggy back pack which held the gear of all three of us.

Why would you recommend climbing here?

The quality of the rock is amazing, climbing here is a true pleasure. An expedition to Taghia is quite simple to organize, and quite cheap. After travelling for a day you are catapulted into a reality which is out of this world, and while you climb there the days pass by with a relaxed rhythm, with the chant of prayers sung by the muezzins, by the tea of Berbers and tajine.

The local Berber inhabitants are now used to climbers visiting the area, aren’t they? How do they interact?

The 600 inhabitants living next to Taghia lead a simple life, almost archaic, they sow fields using a mule and they break rocks by the river with large bats to build walls for their houses. However climbers during the last thirty years have been visiting the area more frequently. English sometimes is not enough to communicate, and you need to use French or often hand gestures. Everyone though is kind and cordial.

Ahmed, who manages the hut and was our host, would flash his torch at us when night time would surprise us on our way back from a route, and we would look for the almost invisible goat tracks along the side of the canyon. Even if we were tired, lost along the mountains of a foreign country, it was simply nice to know that someone was thinking of us and showing their presence, as to say that his hut is down there, and he was waiting for us. On the way back, no matter what time it was, we would always find hot soup, tajine, and his warm smile behind the open door.

Do you think you have to got to know the area sufficiently or did you leave with many routes which you would still like to climb in mind? Do you think that you will feel like going back again sooner or later, maybe on a trip with clients?

I already feel like returning to Taghia! There are many routes I would still like to climb. It must be said that the snowfall forced us to climb mainly on slab, since the cracks were wet. There are many beautiful trad and crack routes which we never managed to try! I am even dreaming of sharing this trip one day with clients. The spot is ideal for climbers who climb on 6a-6b on crag and wish to learn how to move on multi pitch sports routes. Or simply for those who wish to tackle an adventurous trip but not too far from home, joining the two factors:  climbing on rock faces which are among the most beautiful in the world, and discovering a fascinating country and its culture. At the end of the day climbing is simply an excellent excuse to travel and discover new corners around the world! 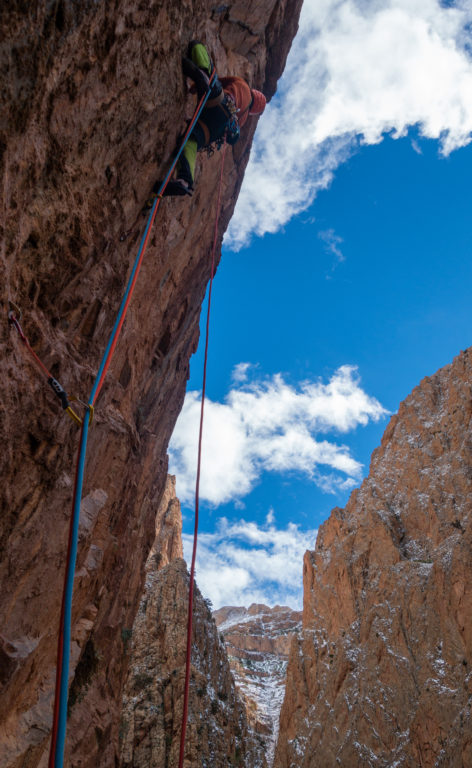 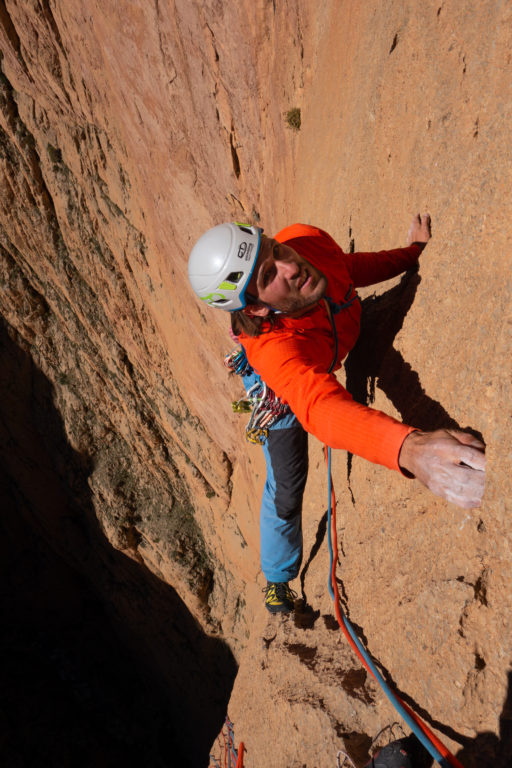 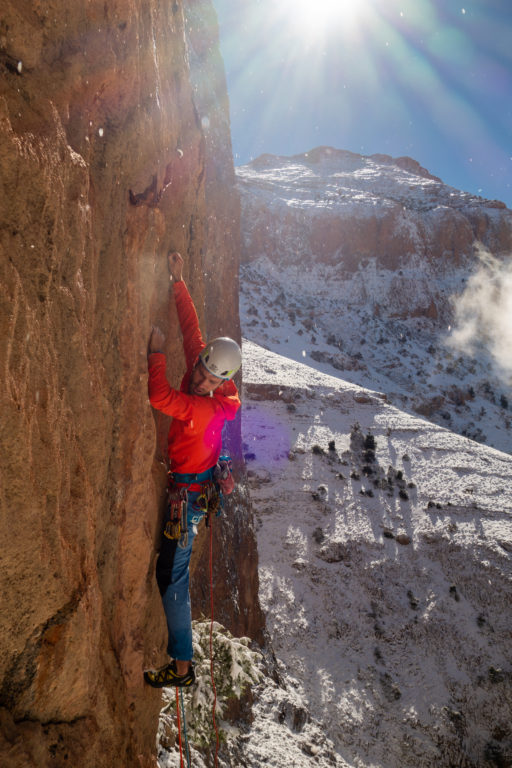 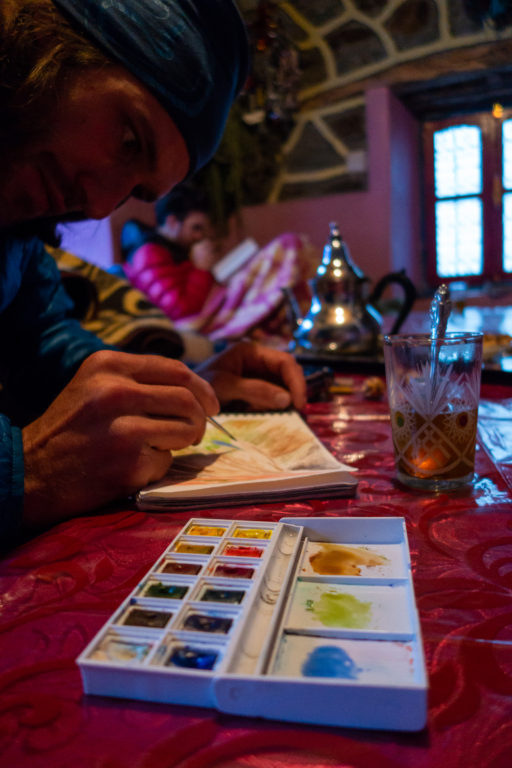 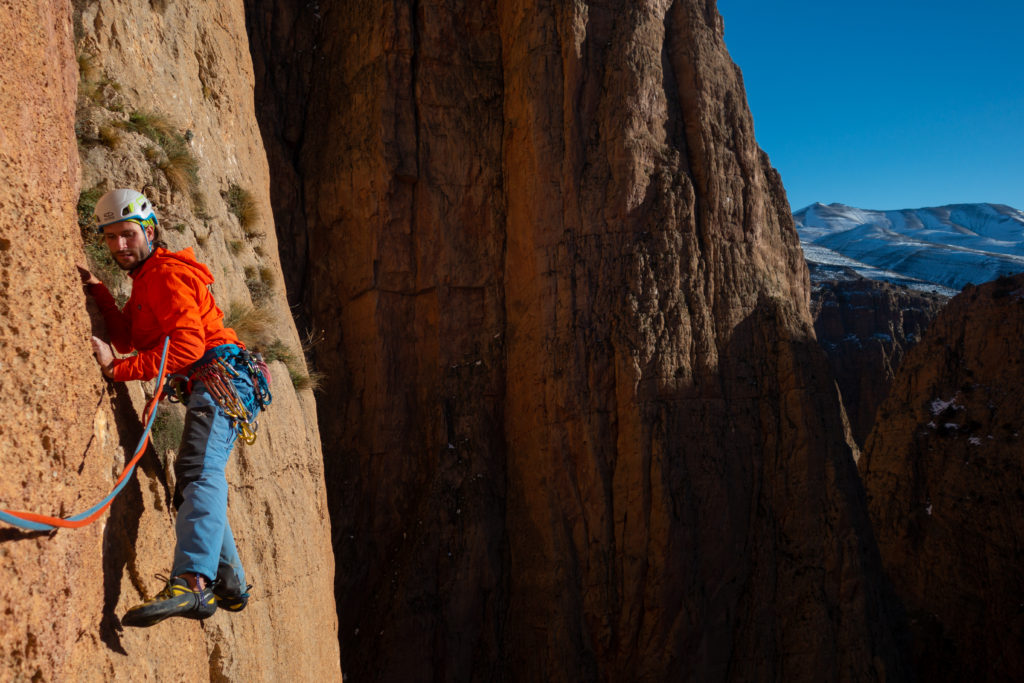 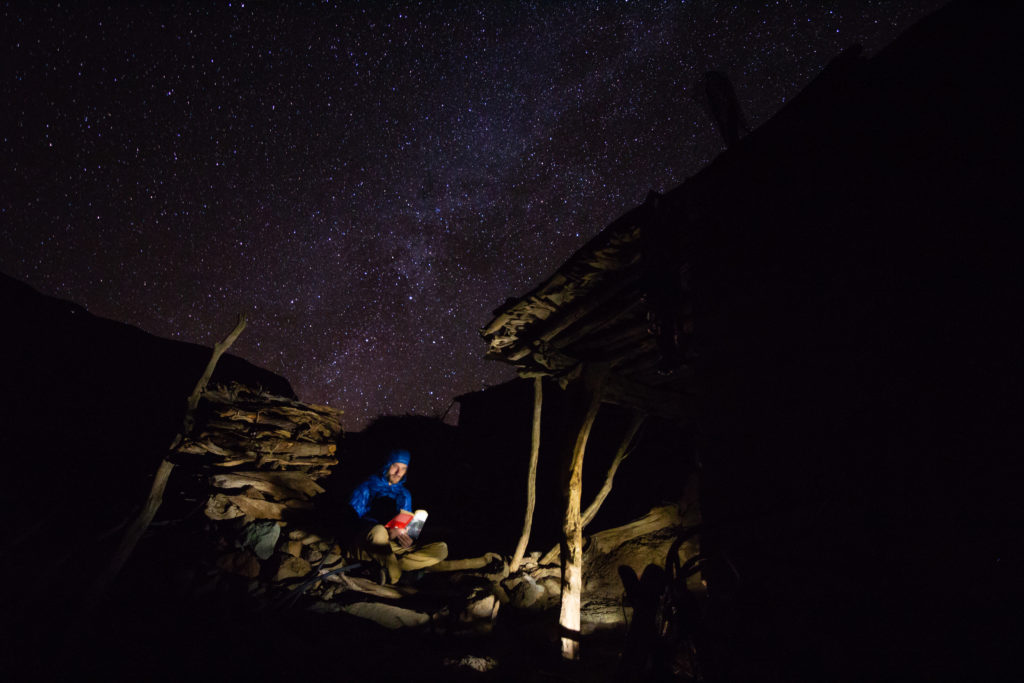 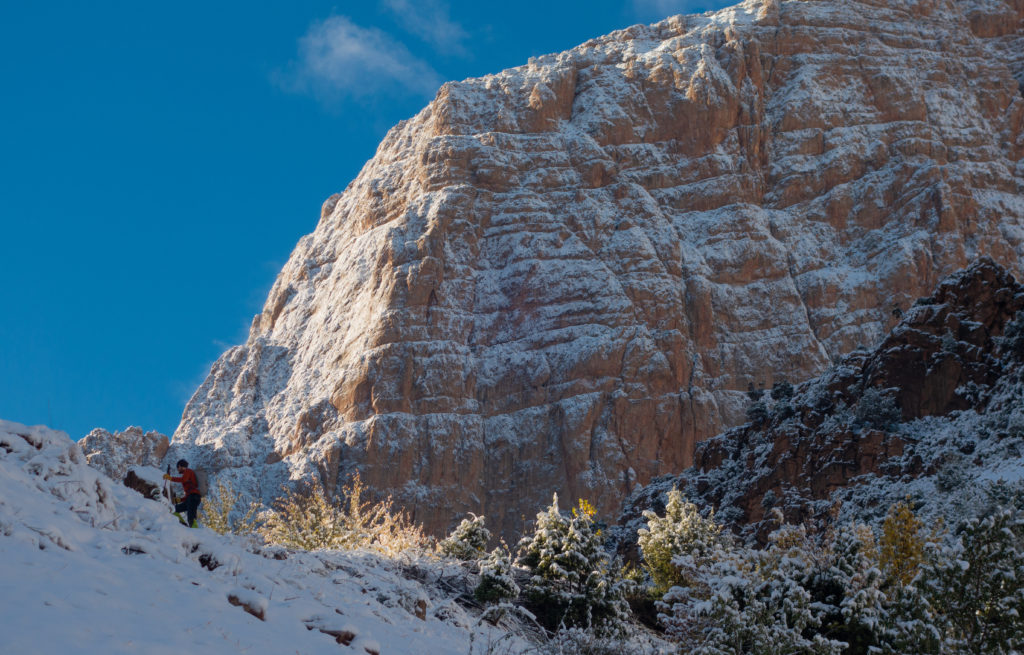 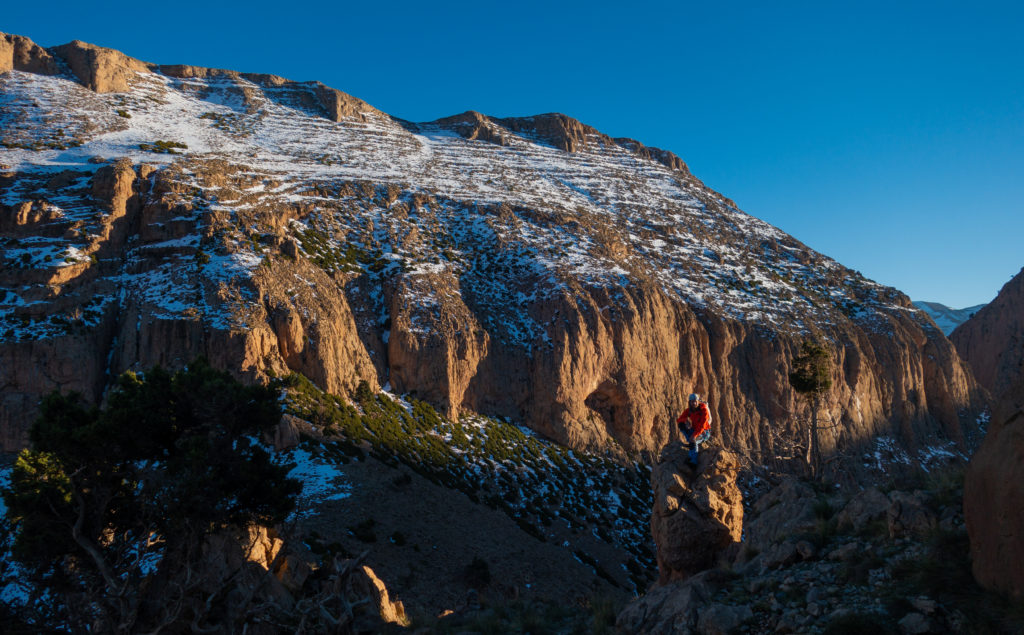 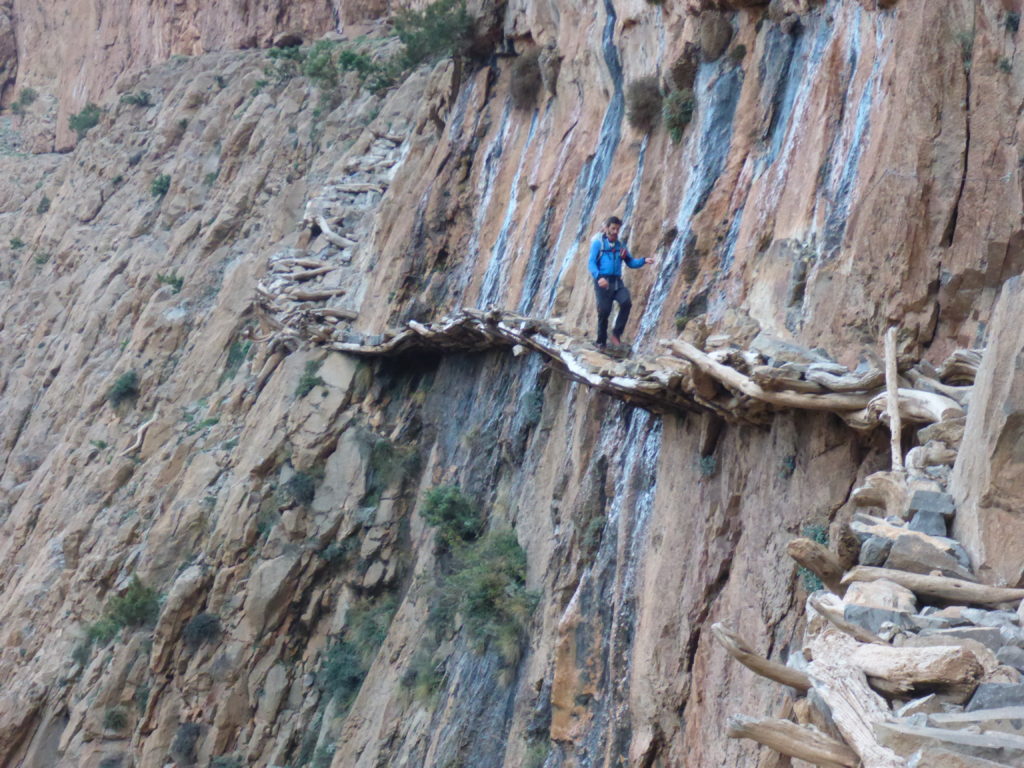 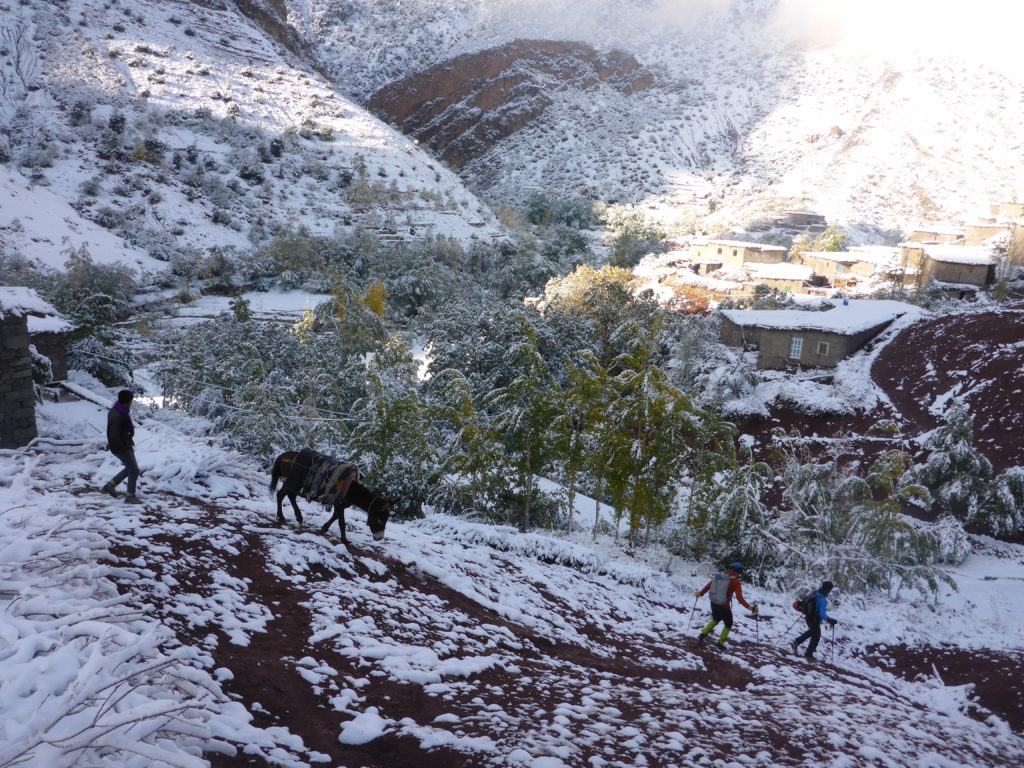 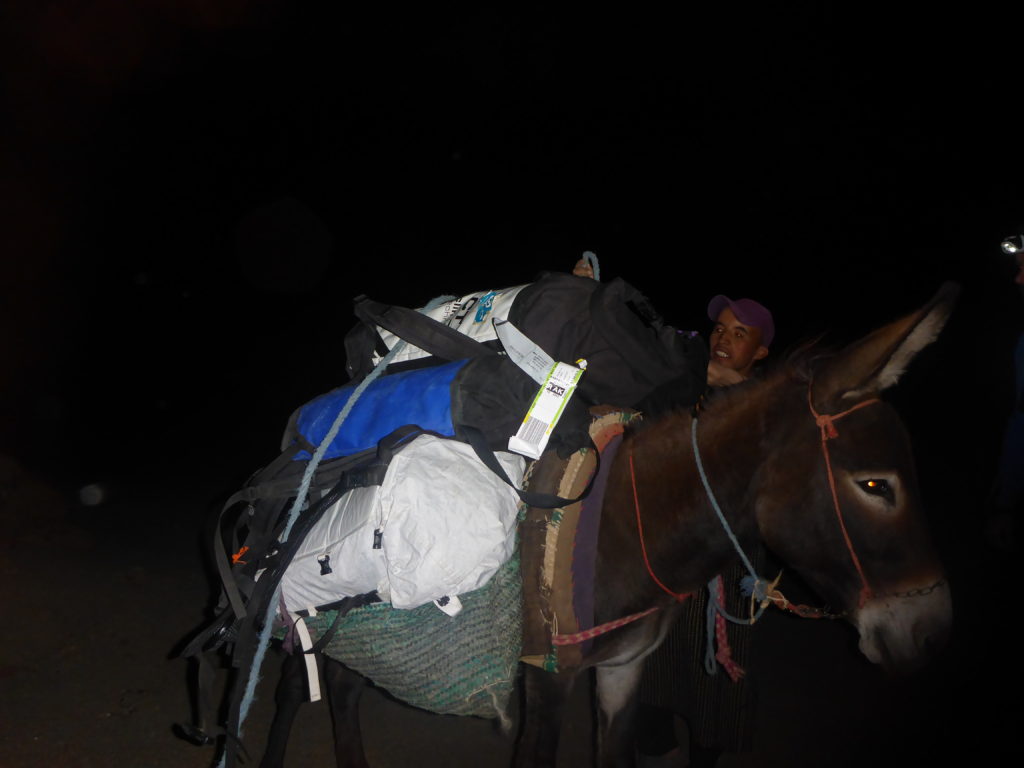 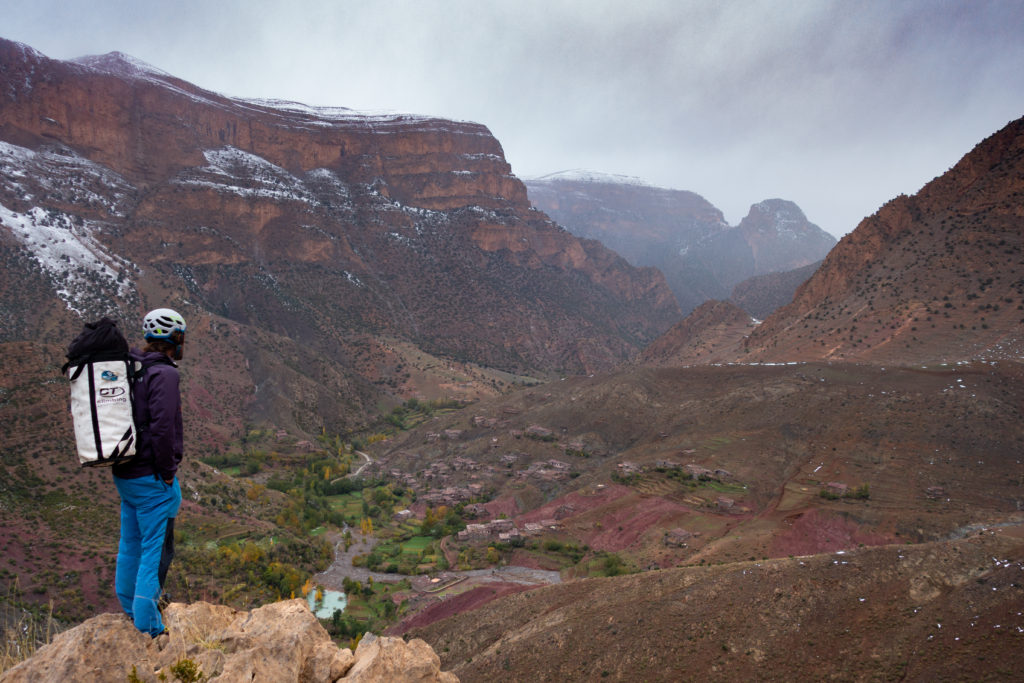 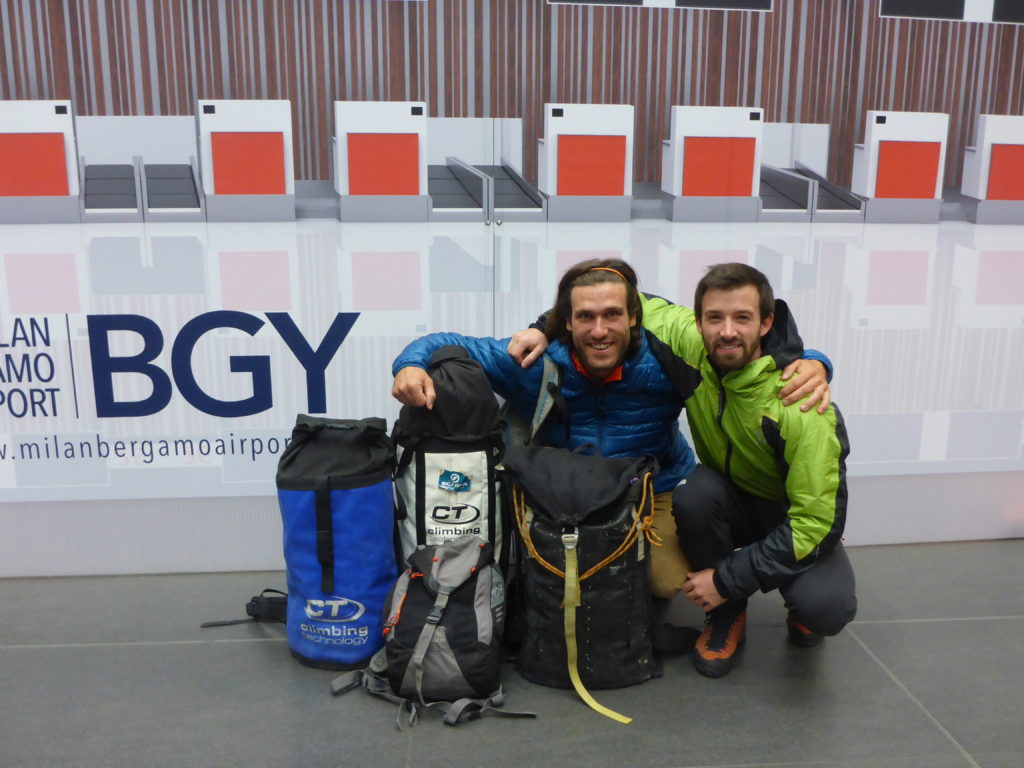