A modern route with mixed protection: bolts along the slabs and on the anchor points, pegs and traditional pro. It is a short and difficult route, and gives great satisfaction. It climbs up a very steep and overhanging rock face, which is always dry even when it rains, a few moves are spectacular, give it a go to believe it. The climbing is mountaineering style and experience is required as well as the ability to climb well above the given grade, since the protection is never abundant and the rock is delicate in some sections. To be more objective, a French grade was given but these are not sports climbing pitches.

We chose to dedicate this route to our friend Giacomo Deiana, an alpinist who came from Sardinia, who was very talented and died prematurely at Cogne, while he was climbing an ice fall, as he was preparing his Mountain Guide exams. Giacomo was a great person, we are sure that he would have loved this route.

The first two pitches are very difficult due to the rock which is loose in some sections, above it definitely improves. The third pitch has a bulge with a bouldery section, the single moves have been climbed but the section has yet to be freed (around 7c). On the second last route there is an overhanging section of very compact rock where unfortunately we were forced to place 3 bolts in AO, definitely difficult to free.

Access: There are two possible accesses to the face, the first is the one we recommend.

From Ranzo: From the town of Ranzo head towards the lower part of the town until you reach a junction with cross and signposts (san Vili path) where a forestry dirt road sets off, follow it, at the first junction turn left (no transit sign) continue along the road without junctions until it ends into an opening in the woods. The road is ideal for off road cars. Take the only path which goes down into the canyon, after just over 5 minutes you reach a stream, from here leave the path and continue half way along the slope towards west following gold coloured marks painted on the trees and rocks which will shortly lead you to the edges of the rock face and to the first abseil point, on a holm oak.

1X15m 2x55m (abseil from tree) 3x50m (bolted anchor point). Towards the end of the third abseil, once past the overhang, stop at the base of the evident corner from where the route starts from two bolts. All the abseils run along the vertical line of the route. There is a first pitch which starts off from the river but it is not worth abseiling down to climb it, it is a grassy corner covered in loose rock.

N.B: If you were to retreat, the abseils are not easy (clip in the quick draws along the traverses) and you end up in the river. The easiest way to get back to the car is to climb the nearby and very easy “the passenger” (topo on internet) to then look for the road running through the woods.

From Sarche: Look for the topo to access the Passenger on internet, the rock face is just above and is visible. You have to wade through the water (waist level), the first pitch starts off very grassy along a corner of 6°.

Gear: cams size 2 (on P3 double1 and 0.75 may come in useful). It is ideal to climb with a single rope and carry with you a small bag with a service rope which will come in useful even for abseiling. 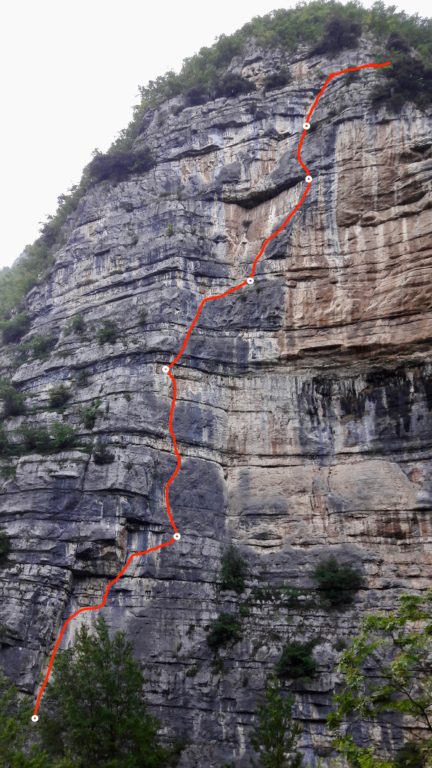 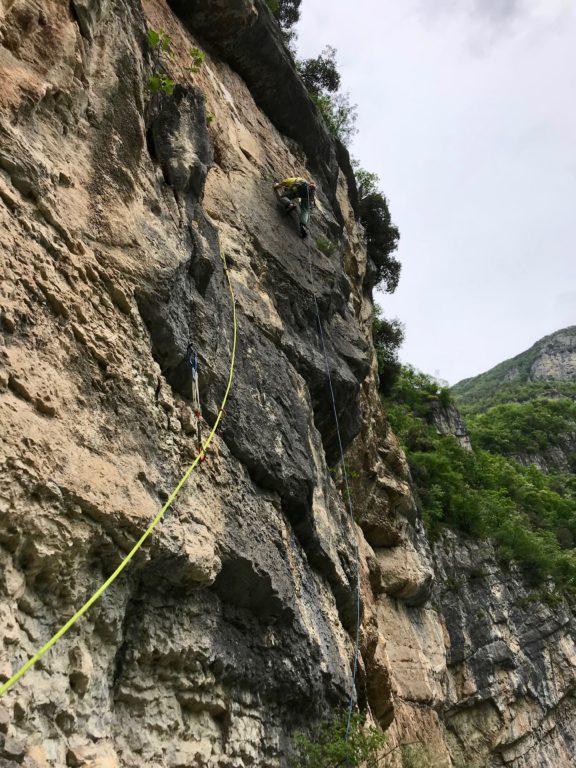