We have discovered something new about our French athlete Mathieu Besnard.

Mathieu has been climbing since he was a little boy; sport has always been in his DNA, until it became his profession. A nasty car accident in 2006 undermined his vertical dreams, but after a long and painful period full of operations for his reconstruction and rehabilitation, Mathieu fought his way back to climbing at a high level. Reaching such high levels, so much so that he reached the top step on the podium last October at the International Paraclimbing Championships in Sheffield. Willpower, perseverance and a lot of training are the words on the agenda for Mathieu with which he measures himself every day.

We are curious to ask Mathieu to tell us about a particular place where he loves to climb:

“I have so many great memories and so many different sports that I love, but I have chosen to tell you about the crag of Claret in the Montpellier region in the south of France; because it is the place that I go to most often and it is also the place I am most fond of. It is in fact right here, where I closed my first and only 8B + called Biotope. It is a route that required me to put in a lot of hard work, but I got such an immense joy when I arrived at the chain. The route is particularly aesthetic and several climbers among which two world-class climbers Ondra and Sharma enjoyed climbing it. 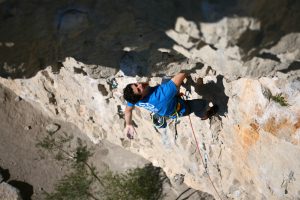 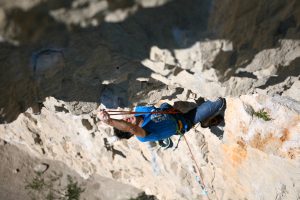 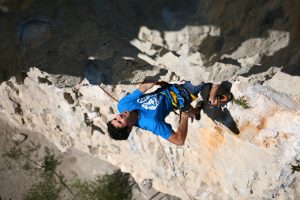 I must confess that I still have several projects still to be closed at Claret such as Super cent Plomb 8B and Super Sansom 8C, but out of all of them a great project stands out for me that is called Guére d’usure 8c (War against wearing out). There could never have been a more appropriate name for a route that is technical and sustained. It remains a real challenge for me that I have still not managed to solve. The route Guére d’usure was climbed onsight by Adam Ondra and repeated – amongst others – in 2009 by Enzo Oddo from Nice who at the time was only thirteen years old, and in 2008, at the age of 47 by Jibé Tribout.

I have lost count of the number of times I’ve tried and re-tried it, during certain attempts I even deluded myself thinking that I was almost there, I know all the moves and I’m sure that I am really just missing very little before I get the line.

The route is divided up into two sections: ten meters of 7b up to an intermediate chain where you have to rest well before the second part that is certainly more treacherous. It overcomes a protruding part and an overhanging section that raises the grade to 8a + and finally, the final part, the hardest and most sustained section. Rocking over an overhanging prow where you have to heel hook on slopers. 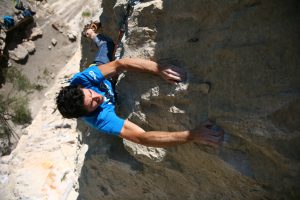 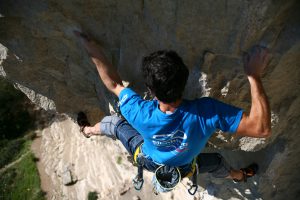 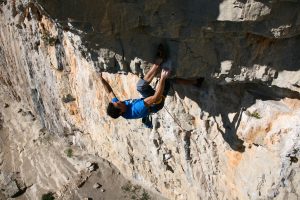 My plan is to go back to try Guére d’usure in the winter because it is the best season for the crag of Claret that is south facing and is sheltered from the wind.”

Mathieu is in great shape, his motivation is always high, and for this reason, we are sure that he will bring us great news of another great achievement very soon.