Kalymnos (Greece). Thursday 9 October 21.00: the inauguration of the third edition of “The North Face Kalymnos Climbing Festival” comes to an end. For us, Climbing Technology, we see finally the first results of months of work as technical sponsors to ensure the success of the event.Next to us, on the stage, also The North Face (main sponsor of the event) and Jeep.

Presenting the evening, which started with a short video of last year’s edition which left the audience open mouthed, from the UK Niall Grimes (climber, journalist and guide book author), Tiziana Di Gioia (marketing manager, The North Face), Simone Moro, the mayor, and the presidents of the Kalynmos Tourist Office and of the Greek mountaineering federation. Because everyone has only praise for this event which in its first two years brought to this island where there were “only sponges” 700 athletes from more than 30 nations. 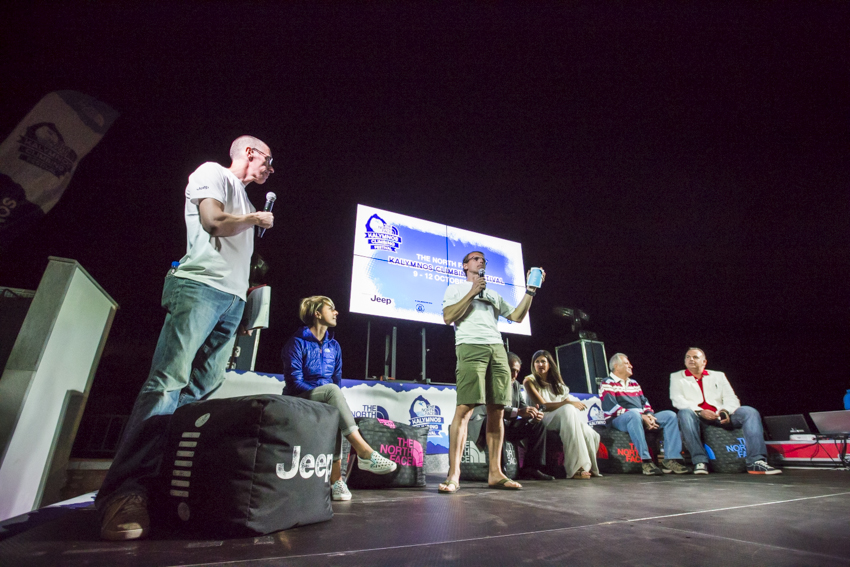 An innovation for this edition, as we mentioned in the article which described our participation in the festival, is the Legends Competition: Patxi Arocena, Gerhard Höragher, Ben Moon, Boone Speed, Jean Baptiste Tribout and Yuji Hirayama which will be held at a new super-secret crag on the island of Telendos (15’ by ferry from Kalymnos), with loads of routes still awaiting their FFA, to be graded and given a name. The money prizes for each route freed will be donated by the Legends to the island’s Rescue Team and the Kalymnos hospital’s orthopaedic ward. This shows that the “climbing legends” – who in response to Simone’s question, “What’s it like to be considered a legend?” answered jokingly “Very good!” – have a heart of gold.

Simone Moro, who from the stage wanted to mention fellow Italian Legend Maurizio Zanolla (Manolo), who couldn’t be present due to a last-minute problem, mentioned as well the great time he’d had (together with Hansjorg Auer and our Product Manager Stefano Codazzi) with a group of young people from the Kalymnos high school with whom, on Wednesday 8, he’d taken climbing for the first time. We will shortly publish an interview dedicated to this day.

Friday will be the first day of the Big Marathon (competition for pairs lasting two days). Climbers of all types have come to Kalymnos for the event: from the best climbers aiming to do well in the competitions to the “No Big” as we say in Italian for whom climbing is what they love, irrespective of the grade and the difficulty. We accompanied them to a crag where they can try out our products at the Test and Feel points (a free T-shirt to all those who take up this offer).

Follow the next updates from the rock island and who knows, perhaps tomorrow will produce some unexpected surprises.