Kalymnos (Greece) It’s official. Where better than The North Face Kalymnos Climbing Festival to be able to announce Climbing Technology’s sponsorship agreement with Tamara Lunger from Südtirol. For some time in Climbing Technology we wanted to find a young, enterprising and worthy climber and are glad to be able to say that we have now been able to find the right person. 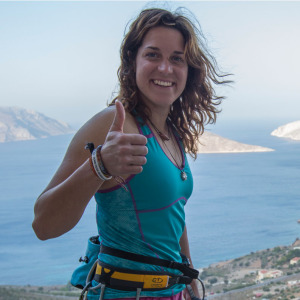 Tamara, born in 1986 and with a Sports Science degree from the University of Innsbruck, became this year the second Italian woman (after Nives Meroi) to reach the summit of K2. Tamara, recognisable for her clean-cut face, grew up in the mountains and started ski mountaineering in 2002 before beginning her high-altitude mountaineering career. Among her major successes, we can list Italian ski mountaineering champion in 2006 and 2008, and winning the Pierra Menta trophy twice (in 2007 and in 2008). Sponsoring Tamara, defined by the Italian press when she climbed K2 as, “the new women’s mountaineering promise ”, is the first of what we hope are other future similar collaborations. 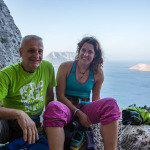 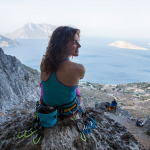 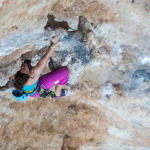 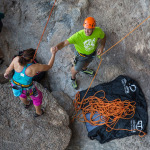 Despite here love for rarefied altitudes, Tamara demonstrated she is a very good climber. She described the route she climbed as “super”, an adjective you can also use for her smile and contagious laugh.

“Tamara Lunger is a dreamer. But she actually wants to dedicate herself to making her dreams come true. This is in fact the difference between those who’d like to and those who want to. She knows that there is no such thing as an impossible dream. You just have to change the “how” and “how much” you have to work to achieve your objectives. Tamara has decided to aim for the top and she has lots of hard, intense work in front of her. But there is no better way to live life authentically.”

Climbing Technology is proud to support Tamara for her future adventures!